Introducing Milo Gore :: lockdowns, debut album, and his battle from rehab to recording 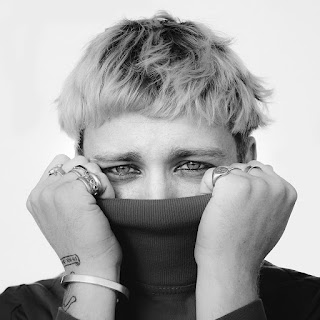 Releasing his debut album 'How Do You Cope While Grieving For The Living?' back in August, Milo Gore struck a chord with those who had been fortunate enough to come by it. Being personally blown away by its variety and depth - something not felt since Idles' ‘Joy’ album a few years back - I caught up with Milo for a quick chat.

Milo, good to catch you for a few words. Could you introduce yourself to our readers and what drives you to be a musician?

Hey. Well, I am originally from Falmouth, Cornwall and now relocated to Bristol to be closer to the action. What drives me to be a musician? I’d have to go with the fact that being a musician, and even more so, being a songwriter, has allowed me to put my emotion into songs. As someone who struggles deeply with their mental health, music has always been an outlet for me, and a way for me to tell my story. Ultimately, being a musician has given me the chance to be someone. To be something. Now I just have to prove to everyone that it was the right decision.

You have an eclectic range of musical styles, could you name some of your influences?

There are so many artists and bands that inspire me, but I don’t know if I then actually create that type of sound! My favourite artist of all time has to be Ben Howard. He is definitely one of the main reasons why I started to write my own stuff. His first album was brilliant, but for me it’s his second album ‘I Forget Where We Were’. Bon Iver is up there as well. He is such a flexible and inspirational artist, and has never pigeon-holed himself into one genre, which is something I certainly aspire to achieve myself.

Other inspirations also include Rainbow Kitten Surprise, Counting Crows, Sam Fender, girl in red, and the classics like Keane. My band I play with have so many different styles, and really different backgrounds, which has accumulated into the current Milo Gore style! My songs wouldn’t be anything without my team and they’ve really taken my sound to the next level.

What’s the story behind the latest album and your favourite track from it?

Ooh, that is a blooming hard question! Ultimately, it’s a record of love, loss, drug addiction and a battle against mental health, an album carrying a message of personal acceptance. After recording the album in June/July 2019, I then ended up in rehab for drug addiction later that year. I had really hit complete rock bottom. I’m not a religious man, and I don’t believe in life after death, so when you’re gone, you’re gone. That is why I grieve for the living. Just look around.. it’s an absolute shit show.

When it comes to my favourite song.. I think that would potentially be either ‘Meds’ or ‘Jade’. I love ‘Meds’ as it has to be one of the most brutally honest, raw songs I’ve ever written. Then with ‘Jade’ I think it's powerful how I am really owning and accepting my difficult past. I also just think it’s a bit of a banger…! Also, just to add a lighter note to quite a dark answer, I am now two years sober and one year clean from drugs. Things do get better.

What impact has the pandemic had on you and your band, and how are you coping with the lockdowns?

It’s been really tough. I haven’t had a full practise with my band since January/February time, before lockdown mark one. I miss it so much, and I miss them even more. It’s just difficult, as you start to lose your purpose, ya know? Now we’re stuck inside, stranded apart from each other, all trying to be creative in our confined boxes. So yeah, it’s been tough. My creativity has definitely taken a hit. However, I’ve gotta say that I’ve also slightly enjoyed quarantine and the time to focus on myself and my mental health: try and look for silver linings when and where I can! Now I’m just itching to get back to playing live. Soon I hope!

I hear that you’re environmentally aware, so what steps are you doing to reduce your carbon footprint?

Well, my flatmate Josh Collins and myself have started to produce homemade merchandise. Josh is the one who helps bring all my ideas and content to life through his amazing photography and videography. We are essentially up-cyling our old clothes, donated clothes and some awesome charity shop finds, in order to create more sustainable merch. We will also be making our own Milo Gore patches. Through all of this, we are trying to reduce our carbon footprint, reduce waste, and increase the amount we can recycle and re-use. I just hope more and more bands get involved with this sort of thing. We can't just leave this to others. It’s time to make a change. It’s time to make it happen for ourselves.

Are there any new bands/artists currently on your radar that we need to know about?

There are so many bands and artists I could mention! However, I’ll try and list some of the ones I am listening to right now. Giant Rooks from Berlin, their debut album is catchy as hell and my favourite song ‘Rainfalls', although simple, ties the whole album together. Brighton’s Alfie Neale has an awesome style and manages to meld so many genres together, and just draws you in with such lovely hooks and melodies, I often listen to him as I’m doing stuff around the flat, and I find myself subconsciously grooving to it.

For a curve ball, I’d also like to mention Aidan Fraser, a 19-year-old South African musician. I only discovered him because he and his friend did a cover of my side-project band (Tapes) and put it on Instagram, it’s a mashup of our song ‘Adele’ and one of Dodie’s tracks. I think he’s very talented and has a lovely voice. So I’m really intrigued to see how he gets on in this industry.

You’ve just been signed to Creative Sounds UK, so what are your plans for the future?

My debut album was like four years worth of work piled into 12 tracks, and now as that chapter comes to an end, a new one begins! I’m really excited for the future, especially to be working with my new manager Ade, and the rest of Creative Sounds UK team. I think I am going to be able to produce some really good music. Ade’s been really supportive of me and my mental health and the way I work, and with that support, along with the freedom to create brutally honest music, I think the future is bright. He’s honestly given me a new found motivation to start creating again. It just shows, support and belief are very powerful things.

Hmm, I guess I can tell you that there is more music on the way in the form of an EP. It’s essentially Part 2 of the ‘How Do You Cope While Grieving For The Living?’ album, as it was recorded at the same time. However, I held back these songs as I thought it would be stupid of me to release a 16/17 track album as a debut, haha!

So here we are... There is an EP being mixed. I’m really excited about this batch of songs. I think they’re really cool. That is all I’m gonna tell you for now. Come back and interview me again when it comes out..!