The Pagans S.O.H announce 'The Pagans Are Alive'! 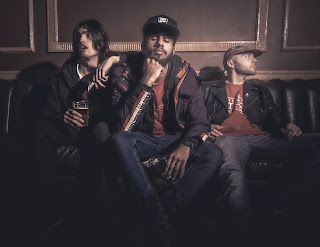 West Bromwich indie-funksters The Pagans S.O.H bring their own take on lockdown hell with new song ‘The Pagans Are Alive’, released on November 14 through Fade to Dust.

Produced by indie supremo Gavin Monaghan at Magic Garden Studios in Wolverhampton, it kicks off with heavy drums and ghoulish synths, before vocalist Marcus Lesycsyznski-​Hall starts to wax lyrical at a gritty, rapid pace, weaving in and out of the melody alongside its guitar riffs, offering a sense of urgency and fun into its serious subject matter.

“This song is probably the heaviest and darkest we have released so far but then again we are living through a strange, dystopian era and we are true believers that difficult times produce some of the most exciting music," states guitarist Daragh Guest, adding that "whilst our riffs may be serious, we are Black Country lads so there’s definitely a bit of humour and light-heartedness in there too."

The accompanying video, which was directed by London-based filmmaker Karis Crimson, gets to the beating heart of the song with its surreal nature and brings along an element of fun.

As the nights draw in and lockdown continues, time for a lifting of the spirits as you drift into the upbeat world of these Black Country pagans.