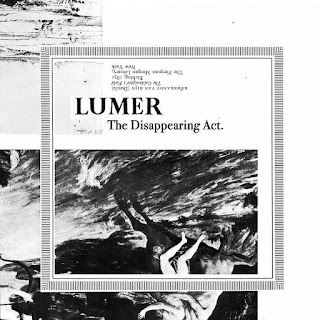 Yorkshire post-punks LUMER are a band which face the gritty reality of life head on. Since forming in 2018 the band have slowly been building up a reputation for their no nonsense approach, as they are clearly not afraid to express their opinions.

Their debut EP ‘Disappearing Act’, recorded and produced by Alex Greaves at The Nave, is comprised of seven tracks that delve into a range of topics while staying on the general theme of facing the grim reality of the modern day. Although tackling serious, and quite bleak, subject matter, the band have enough energy and talent to make for an engaging listen.

The bluesy feel of opener 'She's Innocent' gives way to frenetic standout 'First is Too Late', both exuding serrated vocals and thrashing guitars. The power and impetus is continued on the title track, which focuses on a man’s final days reflecting on his experiences with loss and profound emptiness. It’s a sobering sentiment of hopes and dreams diminished as he slips finally into oblivion. 'White Tsar’ is a fierce, guitar-led number that depicts the innerworkings of tyrannical, power-hungry leaders through the ages.

Another standout, ‘The Sheets’, a song which allows for the production to shine through, juxtaposes hate and love as Alex Evans' vocal claims the attention and add to the emotion as well as increase the raw feeling which the track embodies.

Speaking about the EP, Alex has previously said how "the entire writing process felt incredibly easy. It takes, whoever can be bothered to listen, down a bitter road of different experiences and what we despise in the world. It talks of love, hate, hope and death, and ultimately the personal things that affect the majority of people’s lives."