New teen pop sensation Robin Ashcroft stops by to Sing & Tell on her debut single, love of Lady Gaga, and being in the right place at the right time 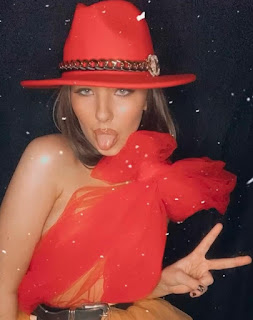 Still only just having released her debut single ‘I LUV U’ (produced by Johnny Madden and Jamie Holmes), 17-year-old Scottish singer-songwriter, Robin Ashcroft is already being hailed as the new face of teen pop. The soaring pop song, incredibly written when she was just 13, ‘I LUV U’ showcases not only her songwriting ability, but her incredible voice.

I’ve been singing since I was little, but when I was 13 I started doing open mics in and around Glasgow. I didn’t play guitar right away, probably four months after I started I picked up the guitar. Then I got asked at the last minute to perform at Glasgow’s Pride Event on the main stage in 2017 through my local youth complex. Pride Glasgow streamed it live from their Facebook page and it got 40k views in a few hours. I went right after playing to three thousand people, to an open mic, to booked to play at King Tuts. I was buzzing!

I’ve networked over the years at lots of gigs and I’ve been pretty lucky in a sense I’ve always been in the right place at the right time. I believe in the law of attraction: if you vision it, it will happen.

I’ve got so many Influences the biggest is Lady Gaga: I’ve loved her since I was six. But  I never stick to a genre of music, it’s quite mixed. I like Dolly Parton, Kiss, Eminem, Gerry Cinnamon, Roxette, Midge Ure Elvis, Etta James, Pink  - honestly, the list goes on, it’s so varied. I just like what I like.

I just write whatever comes in to my head. 'I LUV U' I wrote in ten minutes when I was 13; that was the chorus that came first. I just played a few chords then strummed  the guitar... and that’s what came out. Then I wrote the verses round about it. But I used wake up in the middle of the night and write lyrics down, then wake up in the morning and not be able to even read it haha! So I started recording voice notes of the lyrics or the melody on my phone then just go back to sleep.

Some songs I’ve wrote parts of and left then then went back later and put two different together. Some are on guitar some are on piano. There’s not a pattern. And I’ve not got that much life experience behind me yet. But I will have one day.

I wrote ‘I LUV U’, as I said, when I was 13. There’s been about ten different versions, but the one recorded is true to the original. It’s a bit more rocky as I always sang it acoustic. I ended up in the studio with the band Dogtooth just to see how they worked, and their manager Jim was like “let us hear one of yours," so I played 'I LUV U' and John did this wee riff and was like OMG I love that!

A week later I went back in to the studio and Johnny Madden was there because he was working with Dogtooth at the time. So he suggested making it a bit shorter but not changing anything. Next thing you know, I’m booked into record it with Jamie Holmes and Johnny producing it and Dogtooth as session musicians. It all happened pretty quickly.

I had a good few festivals planned but they have either been cancelled or rescheduled again for 2022.
As soon as we’re allowed, I will be back in the studio, get some more singles out, and maybe an EP the beginning of next year. I can’t really say too much but I’ve been in talks with some amazing renowned Scottish and UK promoters - and a few other secrets you will have to keep your eyes on my socials to find out lol!
Where can we hear more of your music?
My debut single is available on all platforms Apple, Spotify, Amazon, YouTube etc.