Track Of The Day :: Flechettes - Man Of The Hour 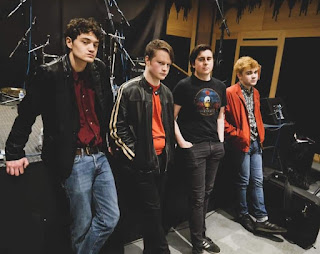 Words: Charlie Emmett
On the rise rockers Flechettes cut a heart-stopping rock bop on gritty new 'Man Of he Hour', out now.

The fast-paced, high energy anthem doesn't waste a second of its 2:31 minutes, with the Wigan-based outlaws packing in some lip-smacking guitar riffs from the scorching off, as you can tell they mean business; rolling their rock around to get you stirred up and going.

“‘Man Of The Hour’ was inspired by those feelings of insignificance most of experience when you're young and out on the town, desperate to impress anyone and everyone," imparts  frontman Jack. "In a way, maybe it's an admission of feeling insecure, when image is still a massive part of everyone's lives and defines how we act around people, even our friends.

"It's definitely a song I've wanted to write for a long time, and we're so happy as a band to finally get a real hard hitting tune out there."

Get your ears around the 'Man...' below. And what's more, they even have three of those things called gigs lined up for later in the year - so make a note!