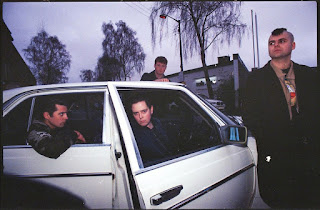 Johnny Madden takes time out from producing just about everyone in Scotland, to get back to his vocalist and guitarist role in Baby Strange and drop a new video for 'Club Sabbath’.

The single is a cut from their upcoming forthcoming ‘Land of Nothing’ EP, out on April 30 through Icons Creating Evil Art.

“We miss playing live more than anything so we wanted to put that energy into a live video of us playing the song off the floor in the studio," says Madden. "Due to Covid, we haven’t been able to tour with these new songs. This live video transports you into the room with us and that’s the next best thing for now.”

The band head out on an extensive UK headline tour later this year (rescheduled from summer) under the moniker ‘Land of Nothing Tour’. See below for dates. Tickets on sale now.

Check out the vid, filmed by Daniel Blake at The Castle of Doom Studios, Glasgow on February 14 2021, below.