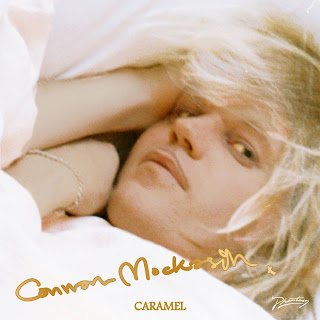 Connan Mockasin has new album 'Caramel' is set for release on November 4 2013.

Just as Mockasin’s first album, 'Forever Dolphin Love' - which he only wrote and recorded because his mother suggested it - was heralded both in his native New Zealand, as well as in the US and UK, his new work looks set to be equally as absorbing.

It was 'Forever Dolphin Love' that pricked the ears of Erol Alkan, who promptly signed Connan on the spot to his (then) new label, Phantasy. Erol’s 10-minute rework of the album title track became a regular hallmark of his DJ gigs and soon artists such as Radiohead, Grizzly Bear, The Horrors, Django Django were citing him as an artist they most admired, in various press interviews. This lack of interest in the bigger picture helps explain the evolution from the labyrinthine, oddball-psych of 'Forever Dolphin Love' to 'Caramel’s' equally inventive and unique brand of mutated, lustrous soul, almost wholly self-recorded over a month in a Tokyo hotel room.

Mockasin remains what Clash Music called “a true cosmonaut of inner space” but the new album explores different regions of his galaxy, not just soul but a liquefied brew of blues, funk, ambient and folk with pronounced Oriental and Gallic timbres, all laced with an uncanny air of bliss. Oh, and it’s a concept album. Of sorts. “The concept is that it's actually an album,” says Mockasin. “It starts with the dolphin [from the debut album] leaving, and the boss (the man) who is so in with love with the dolphin is sad, and then it kicks into the new album, and he is happier. But there’s a car race and a crash…”

In track terms, Mockasin’s narrative starts with album intro ‘Nothing Lasts Forever’, shifts to ‘Caramel’ and later on, crash-emulating guitar shrieks that constitute part three of the five-part ‘It’s Your Body’. Part four, however, is all tranquil and Zen. “That was when I heard my friend was dying and I felt sad,” Mockasin explains, ”it’s just ideas in my head that I put together, and later on it might make more sense. But I don’t think about the meaning at the time. Or I’m not aware of it.” Mockasin is also unaware of the possibility that Caramel has hints of Scritti Politti’s exquisitely stitched soul, or of Prince - if the Minneapolis legend had spent time in Canterbury, the learned epicentre of South East England’s progressive psychedelia during the late ‘60s and early ‘70s, where the likes of Syd Barrett and Kevin Ayers began their own musical journeys. “Prince goes to Canterbury, that’s a good one!” Mockasin retorts. “Maybe Caramel is a little bit soul. Maybe it comes a smidge more from hip hop, which to me sounds much fresher than what’s called ‘indie’. Sometimes I’m ashamed to be in a band, or a musician, at this point in time.”

Mockasin was about to record what became 'Caramel' with his band when he rushed home when his father was suddenly taken ill. In the aftermath, he decided to retreat to Tokyo - whose aura can be heard in tracks such as ‘It’s Your Body (Part Five)’ and the chatter of young Japanese voices dotting the album, adding more levels of intrigue and imagination. “Too much of the music that I do get to hear, I find too aware, or processed,” he says. “I just want to capture the first idea I have, which is always the most mysterious and attractive part.” If 'Caramel' wasn’t enough, Mockasin has also been writing more material for Charlotte Gainsbourg after penning the exquisite ‘Out Of Touch’ for the actress/singer’s 2012 mini-album Stage Whisper. Connan was already popular in France –“it felt like they immediately understood what I was doing” – and their on-going collaboration will only endear him more to the French. It’s another sign that Mockasin is going places, but at his own pace, just as Caramel suggests the process of melting and taking on a new shape, a new taste. That is the true sound of Connan Mockasin.

Connan will be playing live in the UK over the next few months, including September 17 at Village Underground, London. More dates to be announced shortly.