EXCLUSIVE :: Introducing :: FREAK - a new name from Essex that is definitely one to watch 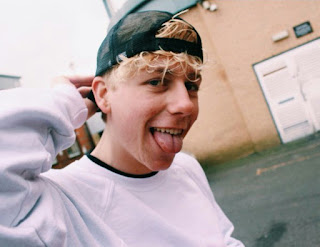 "I can't stand the time/I spend alone in my mind" - 'What Happened?'

Connar Ridd's the name, which unless you inhabit his local Essex environs, may mean nothing. But hang on to your ears and keep your eyes open as Connar, or rather his alter-ego moniker FREAK, could well become as hyped a musical entity as another young man from the same area whom he actually went to school with, namely one Jordan Cardy - these days of course known to musical ears as Ratboy.

The 18-year-old shares similarities with Ratboy in both hailing from the town of Chelmsford, and both with that naughty-but-nice appeal; though unlike Ratboy who was fired from his job in the town's Wetherspoons in the early days, Connar is still hanging in with his CoOp employment, which he combines with studying Music Production at BIMM London University.

"I don't enjoy it [uni], and I'm looking for anything better as an excuse to leave,"  he tells us. "The EP I've just put out is about how I can't really stand what I am doing with my life. I can't stand being at university instead of writing music 24/7, and I can't stand working at the bloody Co Operative! They are a lovely team of people, but stacking shelves is killing me. I just really want to quit everything and focus on making music."

Well, judging by this debut three-track EP, 'What Happened?', it could well be a case of his not having to stack tins of baked beans and loo rolls for too much longer.

"The EP only came out last Tuesday. I've released physical copies, but have already run out!," he enthuses. "So I'm gonna go on eBay to buy some more spray paint so I can get making some more - it's really expensive that stuff, you know! In the meantime, the EP is only available to stream via Soundcloud."

Defining the FREAK style, you could say it's an indie/grunge cross between the aforementioned Ratboy and Stockport's Rory Wynne - and sounding nothing like the death metal band Connar is also part of - called, perhaps confusingly, Kill The Freak - though he is at pains to point out that the two ventures are totally separate.

Playing, recording, mixing and mastering all of his tracks from his bedroom base, he started up this solo project "because I can't practice and gig and record enough with my band as the other members have full-time jobs. I want to write and record music all the time!"

If enthusiasm was enough to guarantee success, young Connar (who seems to possess it by the bucketload), would be on headlining his own shows already.

"Every night when I got home from uni I would - and still do - jam on my £20 acoustic guitar I bought off eBay, and just riff about, freestyle over the top and record it on my phone. I'd listen back and see if I got anything. If I did, I would record the riffs and edit some basic drums, and then write some lyrics properly over the top. Once I had the basics recorded I'd just re-edit to make them sound better."

You can check out the EP tracks below, for which Connar has given us a brief description.

We like the infectious style - 'What Happened?' is the personal favourite - of FREAK, and just from listening to these you can already imagine their being performed in a riotous style live. We can't wait.

'What Happened?' is directly about how much I hate the things I'm doing. Throughout the whole song it should be really obvious. I just can't stand that every day I'm growing older, whilst doing stuff that isn't for me! 'I can't stand the time I spend alone in my mind' refers to me hating being alone and to myself, because I'd always worry that no one would listen to me and that I wouldn't make music - overthinking?

'Someone Help Me' is the second track on the EP, and was the original EP title. I was going to call it that as a direct scream for help to get me out of doing stuff I don't enjoy. It's got similar themes to the first track, but also focus on how I don't care how I should look, and I don't care about what I should do.

'Floating High' was the first ever track I wrote as FREAK. It's basically just saying how people do a lot of drugs and talk about drugs all of the time, and I always feel left out of the convo because I don't.