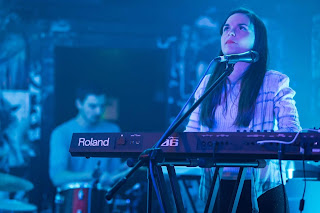 Formed by Spanish-born vocalist and songwriter Bea Garcia in June 2015 with members of other groups, Twist Helix have established a reputation for their signature “sparkling dance-rock” sound.

To kick off 2017, they release new single 'Pulse' on March 31.
Recorded by John Martindale (Shields) at Blank Studios in Newcastle, 'Pulse' comes from their forthcoming second album 'Ouseburn', and is "a bleak future vision of a sterile urban landscape where once existed fringe arts spaces and a creative/community hub; it is the culmination of the shameless profit motivated developments already taking shape around us in our city."