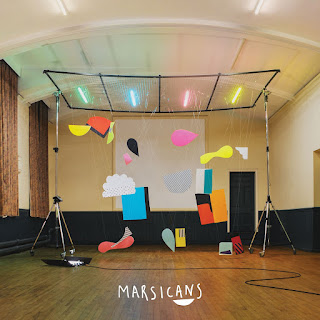 Leeds-based quartet Marsicans have been on a whirlwind of a ride for some while now, from gracing stages at Reading & Leeds festival, to opening for Kaiser Chiefs, and selling out their first 1000-capacity venue in advance. Even with Covid-19 halting their SXSW appearance - not to mention delaying this debut album - they have managed to keep their heads above the water with quarantine videos, and a track (or several) from this 16-song (including an 'Introduction' and three 'Interludes') maiden full-length.

Brimming with a variety of differing styles, 'Ursa Major’ is an album which has a song for every occasion. Driving opener proper, following an instrumental, ‘Juliet’, is the perfect start to the record, full of anthemic guitars that give a sense of the Marsicans live sound, and singer James Newbigging's melodious delivery of the introspective lyrics is juxtaposed against a bumper, swelling chorus.

This energetic jump start paves the way for the Storm Angus-inspired glistening pop of fan favourite, ‘Summery in Angus’; the big hooks of the euphoric ‘These Days’, and the hard-hitting ‘Can I Stay Here Forever (Part II)', highlighting the band's ability to make perfect summer driving anthems to put a big smile across your face.

Elsewhere, the twangy guitars of ‘Evie’ in a reverb-laced, indie pop setting is an upbeat dude that trades its infectious qualities with a nostalgic touch; likewise, the relaxed canter that is 'Sunday', with harmonies from Newbigging and bassist Rob Brander.

But it is the slower tunes that really make this album shine. ‘Somebody Else’s Touch’ is a departure from the band's bright and upbeat, for something that is far emotional and compelling, a heartstrings-tugger of a love gone wrong. "I know in time you'll find a better me / Someone who has what I hope to achieve / I'll force a smile and try to laugh on queue / It all means nothing now that I'm not with you," sings Newbigging, with a beautifully constructed arrangement behind him. It's Marsicans' lighter moment, and the highlight here.

‘Blood In My Eye’ too, where the harmony-laden vocals and smooth guitar work hold court, wind through a palette of drum rumbles and understated guitars, as Newbigging entices vocally, before it builds into a controlled sonic outpouring.

With ‘Ursa Major', Marsicans have been able to pull off an album which never gets boring, and where with the inclusion of interludes, they have allowed spaces for individual songs to breathe. Ursa Major is a constellation of the seven brightest stars in the Northern Hemisphere. 'Ursa Major' the record is a cluster of 16 shining lights, delivered by one of the North's brightest bands.