The VCR Sing & Tell on rockin' in Birmingham, and singing in 'Wonderland' 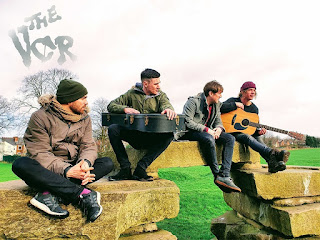 Birmingham rockers The VCR (originally known as The Van Cortlandt Rangers, a reference to a gang from the 1979 film The Warriors) dropped their self-titled debut album back in January, and now return with new single 'Wonderland', out today (August 21).

We’re a four-piece rock band from Birmingham. I saw Joe playing in a band at school when we were 13 and it blew my mind that kids my age could be involved in something that cool. I didn’t know Joe at this point and went home and casually told my brother I’d love to sing in a band. That night Joe’s sister phoned my brother asking if he knew any singers who would want to join and we’ve been making music together ever since. It was a crazy coincidence, one of those serious fork in the road moments for us all to look back on and wonder how different things could have been.

We’ve been told we sound like early Strokes and Kings of Leon. We all grew up listening to thrash metal and punk rock so that heavier side always comes through in everything we write, but like any band worth anything we pull influences from everything we hear, there are no rules on genre or popularity. If it sounds good a musician will always try to understand what's there and add it to the scrapbook of ideas they keep in the back of their mind when writing.

When we’re writing tune we usually start with some chords and a melody that sound cool, strip it back to its bare bones, start jamming and see where it goes. Usually within a few minutes we will have found a groove and it will come together quite quickly from there.

'Wonderland' is a shift to a grittier, more aggressive sound than people might be used to hearing from us. We’ve been working with Gavin Monaghan at Magic Garden Studios and it’s been really cool getting to record with someone with so much experience and so many great albums to his name, he really helps us find the right sound and stay focused on what we’re there to do. The song is about the ways people with anxiety cope in the face of the disheartening crap that is fed to them by the media. Inspired by someone close to the band whose partner used their mental health issues to control them, 'Wonderland' sums up the struggle people go through to keep things in perspective in a world where the worst things are given attention and the best things are so often ignored.

We have a few shows pencilled in. As it stands, we’ve got two gigs lined up for the end of the year in Birmingham - 14th November at The Sunflower Lounge, and 11th December at Dead Wax in Digbeth.