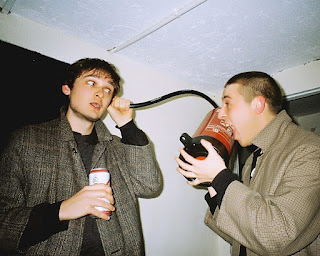 JUMBO, the Bristol-based new project from Joe Sherrin and Kane Eagle of SLONK, were “messing around with very poppy songs” and have come up with two for their wonky indie-pop debut.

“We used to spend a lot of long and silly evenings treating my neighbours and housemates to obnoxiously loud musical offerings”, Sherrin offers. “We came up with and recorded most of 'Platypus' in one night, and then finished it off over lockdown by sending each other vocal/instrument parts to add to it. Kane then recorded 'Witch' at home and sent the files over to me to arrange/mix/add more vocals to. Since doing these two we decided to make a fresh project out of it and have since got a bunch of songs in the works which we plan to drop out in twos.”

The melodically catchy three minutes of 'Witch' sets out its lo-fi stall from the off, coupled with wry lyrics like "I'm burning like a witch in heat".