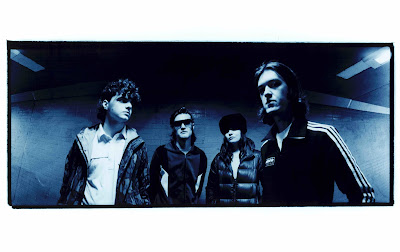 Working Men’s Club have a busy list of midweek announcements.

Firstly, they today share the video to 'Valleys', the latest track from their forthcoming self-titled album, now rescheduled for release on October 2.

"'Valleys' is probably the most honest song on the record and I guess sets a premise for the rest of the album, growing up in a small town and trying to escape," says frontman Syd Minsky-Sargeant. "It was one of the last songs we finished, we couldn’t quite get the right string sound despite layering up about four synths up then Ross brought in his fixed LE string synth and it sounded perfect for the song.

"It’s the first track on the album and one of the last songs I wrote before going into Sheffield to finish off the record. Having been in lockdown since the end of Winter in Todmorden it seems like there couldn’t be a more appropriate time to release this song."

'Valleys' comes via Niall Trask's video, below, shot in Calderdale.

The band have announced details of the release of a 12” of their recent 21-minute 'MEGAMIX' for this year’s Record Store Day on Saturday August 29. Initially only available to stream for seven days in early June, the 'MEGAMIX', a condensed electronic reworking of parts of the album, was released as a thank you to fans to fill the gap left by albums postponement.

Additionally, a 12” of 'Valleys' featuring remixes from Confidence Man and Manchester legend Graham Massey, will be available to pre-order today.
The track listing of the 12” is as follows:

Lastly, following their multi-camera live stream performance at YES in June - read Little Indie's live review here - the band have announced details of a second special event, Basement Transmission #2 will take place on August 21 from the Brudenell Social Club in Leeds with a new set list, live visuals and support from Lazarus Kane. Tickets are available from dice.fm