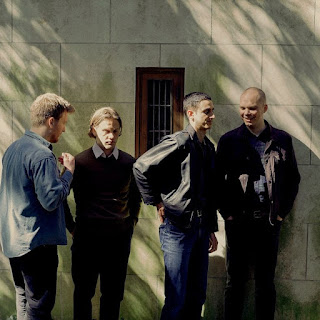 Danish four-piece Yung return with a new 7”, 'Progress' / 'New Fast Song'. The former was first released digitally in June, with the latter following it now, ahead of the 7" release on September 11 via PNKSLM Recordings.

After the Aarhus-based quartet took some time reassessing themselves and finding common ground to push forward, they are back in the studio to work on their next full-length (due early 2021), with the first fruits of that labour in the shape of 'Progress' and 'New Fast Song'.

"The lyrics for this one were written in the backseat of a tour van, at the end of a two-week tour of Europe," says Mikkel Holm Silkjær of 'New Fast Song'. "The last show of that tour was in Madrid and somehow we’d decided that doing the Madrid-Denmark drive without a layover was a reasonable idea. We got up very early in the morning, packed the van and drove out of Madrid. Did a quick stop to fuel up and stock up on essentials. We had breakfast and I had a lot of coffee.

"As we hit the road I was hit by an overwhelming amount of emotions. Post-tour blues, joy of returning home, frustration from realising a normal everyday routine would appear in life, a private economy which was barely existing, the beauty of Madrid and all it’s small and narrow streets and beautiful balconies, an unbelievably hot day and the prospects of being confined in an upright position in the backseat of a tour van the next 2.500 kilometres: All thoughts and sensations that passed through my mind all the while an absurd amount of caffeine rushed through my veins.

"I can’t really say exactly what these lyrics are about, but all of the emotions above somehow made their way into the song. Maybe it’s a song about the beauty of frustration and hardship. Maybe it was just me trying to make sense out of something which did not make sense at the time."