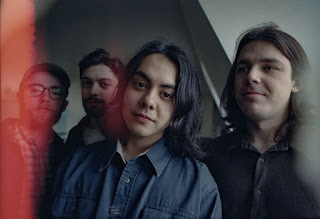 Words: Ellie Ward
Following recent EP ‘Post Modern Motorcade Music’, alt-indie shoegazers Honey Lung offer the first of three upcoming singles, starting with the lo- ‘Room’.
Out now via Big Scary Monsters, 'Room' sees the quartet continue with their sound that encompasses “a hint of indie, a large dash of emo, a pinch of shoegaze and a generous dollop of alt-rock.”
"Its kind of apt that 'Room' is being released now," says lead singer Jamie Batten, of the moody, slowcore number. "It's a song about isolation and cabin fever and all the thoughts that go along with that. It's actually named after the film Room which won some awards a couple of years ago. The film is about a lady and her son who are being held against their will, with no way to escape. I guess I've been thinking a lot lately about the ideas of being isolated emotionally and physically and how it can drive you to places in your head you would never usually go. It can be a great thing or a terrible thing.
"We shot a music video for the track with a friend of ours out in Berlin. The video is essentially me being edgy af for four minutes.”
Take it all in via Lisa Loriene's monochrome visuals.