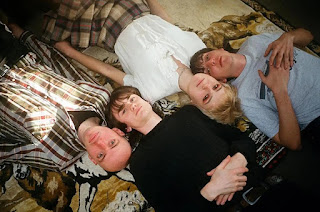 Credit: Through The Eyes of Ruby

"'Harold' is an ode to that crippling fright in the night. To things that don’t go bump, but go “aaaargh," explains guitarist Daniel Hand. "The song spasmed into existence after a series of unsavoury night terrors that prompted to me don my guitar, tune the strings to a level of arse-clenching tension, screw my eyes shut tight and, like a deranged jet-setter randomly spinning a tiny globe in search of the next destination, I slammed a capo onto the neck in a state of near frenzy.

"I tentatively opened an eye. Fourth fret. I picked up a pen as ideas began to fizz, but thought better of it, had a beer and wrote it later."

The band's debut EP 'National Trust' is set for release on March 19 2021via PIAS.