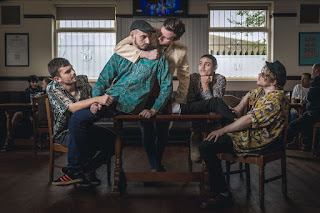 On this latest offering they have gone off the common path, as they look to distance themself from the crowded Manchester indie scene. The four-minute track is a technicolour adventure, which through mellow guitar work and excellent production, sends you down a rabbit hole.

'Cascades of Gold' embodies a forgotten generation of laid-back indie music, one which allows people to feel inspired. This track also has a great vocal range courtesy of Brad Miller which fits perfectly, feeling natural and down-to-earth.

Guitarist Sam Brunt says the song is “one I have been sitting on for a while and we have loved playing it live so it's great to finally get it out there. It's a bit of a change of direction from some of our other tracks and really highlights the different talents in the band. It's the song that we end our set with a big funk outro where the band gets to showcase what they can do musically.”

Although a departure from their norm, Suave Martyrs, clearly are looking to stand out from the crowd. If they keep inviting us down the rabbit hole, they may just be in for a breakout 2021.