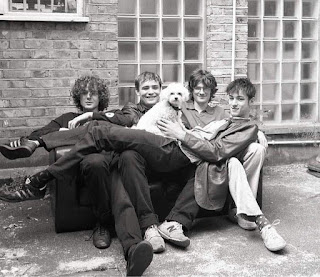 The Lounge Society have dropped the news that their debut EP ‘Silk For The Starving’ will be here on June 18 via Speedy Wunderground.

Ahead of that there's a new single ‘Cain’s Heresy’.

Produced by Dan Carey, the Hebden Bridge quartet describe the song as "a portrait of the world we’re headed to - where consumers lie sedated while ‘This Week’s Hot Trend’ and ‘101 Style Tips For Summer’ are forced down their throats by gloved hands.

“It’s our way of saying ‘not on my watch’. Cain and Abel were brothers at war, and this song is our last stand in the war on culture which is being waged by corporations at the moment. Musically the song isn’t designed to fu*k about - we could’ve filled it with 7th chords and synths and bleeps and bloops but we wanted it to be raw and honest, and we think it sounds all the better for it.”

Check it out via the Nick Farrimond-directed video.