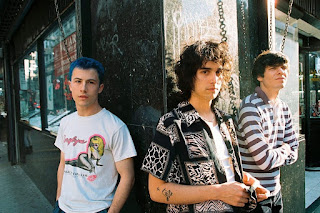 Ahead of the release this Friday (February 19) of a deluxe edition of their 'Remote' EP, LA alt-rock trio Wallows have unveiled a new track for 2021.

'Quarterback', which features drummer Cole Preston on vocals, is the first of three new songs the band had been working on during the recording of ‘Remote’ last year.

"Cole started this idea a long time ago, probably years ago," vocalist Dylan Minnette told Apple Music's Zane Lowe. "Honestly, we've always really liked it, but then last year when we were doing 'Remote', we decided, 'Ah, it doesn't fit enough with the rest of the songs.' And so by the time 'Remote' came out, we were just like, 'Well, I feel like these other songs we started, including 'Quarterback' aren't necessarily going to work on the next thing we're making, the next album. And also, what's the point of holding things over?'

"We used to be like: we'll just wait to put it out. It's like, nah, you got it now and it's good, just get out of the way and put it out. So we tried to finish it with the same guys, Saatchi and John and Caleb, that we did the rest of the 'Remote' EP with, and we're super excited about it. And now we've got these three songs, and actually 'Quarterback' was just going to come out at the same time as the other ones, but it's coming out as a single first, which we're really excited about it."