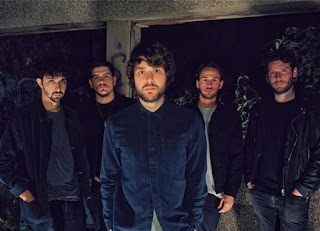 The Rah's are back with a new single, an album on the way, and feel they are finally making headway again after the last year's global collective halt due to the pandemic.

The East Lothian five-piece dropped 'She's Not' on Friday - the first we have heard from them since last summer's 'The Time Is Now' - released via their own EH32 Records.

"The track was written about a not-so-stable relationship built on money and material goods," reveals singer Jack McLeod, "Not about a relationship I've had, just about one we've probably all seen, or can relate to."

Recorded at Black Mountain Studios in Dundalk, Ireland with James Darkin, and mastered by Richard Dodd in Nashville, 'She's Not' has all the indie grit and drive we have come to expect from The Rah's, coupled with a slighhly heavier vibe that sits well within the melodic framework.

After not just delays to their debut album in 2020, but also the cancellation of their tour for promoters This Feeling, they are now looking to release the long-overdue album, 'When Does It Become Real?', next month (completed after a Kickstarter campaign raised over £5K) and a tour soon after. It's ra-ra-ra go for The Rah's at last!