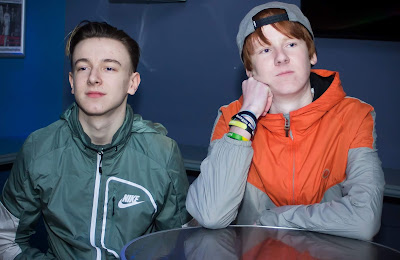 Scottish two-piece Pyro serve up another ace with new single ‘Don’t Hold Back.’ The track, released this week, sees them continue their ascent up the musical ladder with (old recipe) Irn Bru-fuelled ease thanks to a snappy riff and a clean, but menacing sound.

The duo are continuing to refine their sound with every release and whilst there’s distinguishable similarities to the feel of their debut track ‘Money’ which was released last year, and the more recent 'Too Far Gone', there’s without doubt a more mature and thought out approach to their recent recordings, which acts as a real signal of intent from band. It’s evident that they made the right call when faced with the early musical fork in the road, so they haven’t typecast themselves to a certain sound or genre, something which can be extremely hard for a lot of new bands and it can often be too late before they realise they’ve gone down the wrong road.

‘Don’t Hold Back’ was captured and secured inside a tape at Mark Morrow audio in Edinburgh with the accompanying video produced by Iona Morrison and filmed in Bathgate’s Midnight Breakfast Club, a venue the band have sold out several times with their messy and raucous hometown shows.