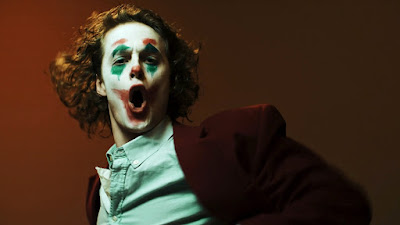 Directed by Edwin Burdis, Cardiff's Buzzard Buzzard Buzzard share the video for latest single ‘Hollywood Actors’, which they dropped earlier this month, and which also appears on forthcoming debut EP ‘Non-Stop’, out July 10.

“The video for ‘Hollywood Actors’ is one of my favourites I think, just because it’s led by a simple idea," says frontman Tom Rees. "I hope it all comes off as ironic enough, I really don’t want people thinking I loved that Joker movie, I thought it was awful, the idea behind that part of the video was all based around everyone’s reaction to the fact that Phoenix improvised that dancing scene, as if dancing isn’t a spontaneous effort anyway, good or bad.

"It tied in nicely with the lyrical content of the song, personally I think the type of attitude expressed in the song outlines why that film was considered a success, but I’m not a film critic anyway, what the hell am I talking about!”