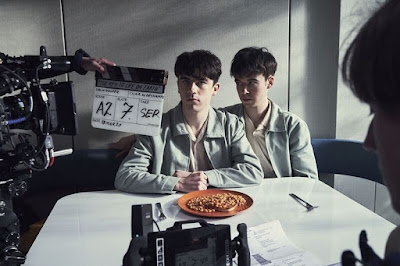 Declan McKenna has unveiled the second track from his forthcoming second album, 'Zeros', now to be released on August 21.

'The Key To Life On Earth' is aired via the video below, which features a special guest appearances by Alex Lawther from Netflix/C4’s smash hit series, The End Of The F***ing World.

Filmed in East London pre-lockdown by director Will Hooper, “The Key To Life On Earth reflects on mundanity and hostility. I suppose it’s set in suburbia much like my hometown," says McKenna.

"The video sees two people, who are very similar, in conflict with each other, and I think that’s the simplest analogy for the song’s purpose. Alex Lawther is someone I’ve wanted to work with for a long time. I enjoyed watching his roles in Carnage, Black Mirror and The End Of The F***ing World, and I was trying to get in contact after seeing how much people compared us online. After finding I had a mutual friend with one of his family, I was eventually able to get his number and we got talking.

"We met up for tea a few times and found out we really did have a lot of mutual passions and ideas, and we shared and compared our experiences of working in our respective creative worlds."