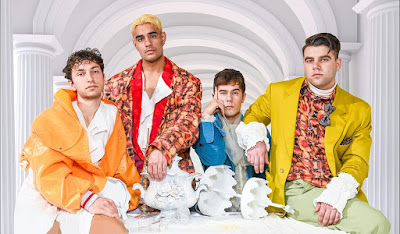 Coming ahead of their debut EP 'There's No Such Thing As Good People' out via Sony subsidiary 123 Music on May 22, Australian four-piece Pinkish Blu return with lush new single, 'Red Hot Moon'.

The always worth hearing Adelaide electronic pop outfit perfect their trademark sound on the wistful, gently tempered track, which is accompanied by visuals directed once again by drummer Luke Franceschini, and supplements the theme introduced in last year's 'Superstar' video, which also features the same cast of Chira Grasby, Milo Trnovsky, Emily Ritchie.

"Lyrically, ‘Red Hot Moon’ was probably one of the most simple songs I’ve ever written”, says singer Brice Young. "The whole song can be boiled down to an event that happened in the span of about one minute. Obviously there’s metaphor all throughout the song but the actual inspiration comes from a fragment of time. One small moment can really be a profound thing, the heightened state of emotion one can be in while in a short timeframe can repel any sort of logic or rationale. Which can obviously be a dangerous thing but it’s also quite a cool thing in my opinion.

"To really be in the moment and almost oblivious to the immediate or distant past and future; those are the movie moments. Where the background blurs. Whether they’re basically irrelevant afterward or a precursor to something bigger, those moment are also they’re own thing."