Southampton duo The Vitrines shine with 'Diamonds in Her Eyes' 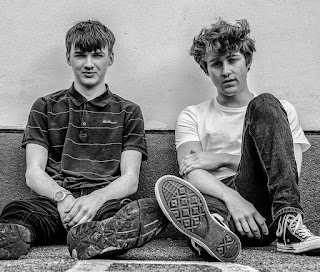 Released earlier this month, the newest release from Southampton rock duo The Vitrines, 'Diamonds in Her Eyes', was brought forward from May, when it was initially set to coincide with their UK tour dates, now rescheduled to the autumn (see further down) due to obvious reasons.

The track throws the initial buzz of a guitar at listeners before the introduction of a rhythmic drum beat anchoring the song's catchy tempo, which is maintained throughout this intense three minutes. The impressive sound generated by Alex Donovan on vocals and guitar and drummer Morgan Haynes is a fully-fledged 90s reminiscent offering which escorts listeners through the pursuit of love whilst tackling the efforts to be idolised, and is the perfect partner to get you through these self-isolation times.

SEPTEMBER
04 The Joiners Southampton (for This Feeling)