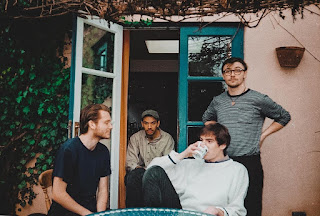 Created during lockdown with animator Tom Sharp, London four-piece moa moa have released the second episode in their retro-futuristic animated mini-series ‘Please, Slow Me Down’.

The whole series will be released together alongside a limited edition zine, the 50 copies are available to pre-order via Bandcamp, featuring animation stills, an exclusive download of all five tracks featured in the series and more.

moa moa and Tom had previously discussed working together on a project together, then when lockdown hit, it seemed the perfect opportunity to work on something creative during isolation. The concept of the series had already loosely been discussed after a night marvelling at the spaceships in Todd Douglas Miller’s Apollo 11 documentary. The mini-series explores isolation, the exaggeration of the situation is used as a playful way of talking about what is happening right now.

“Collaborating with Tom has made this process so dreamy," enthuses the band's James Ratcliffe. "It has given me the chance to adapt and finish so many old tunes and sketches that I loved but either couldn't figure out how to finish, or found that they were too much of an oddity to exist by themselves. If you usually make things by yourself, it’s great to have someone from a different discipline come in from time to time to inspire you in unexpected ways. This has definitely been the case with Tom, and the way in which he has added a different perspective on certain moa moa ideas.”