'Listen' up to Dutch alt-poppers Banji with their debut single 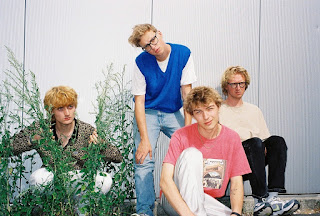 With an infectious chorus and plenty of 90s energy going on, the four-piece showcase the track (which was recorded in their bedrooms before being taken into ICP Studios in Brussels) with a video, directed by Pasqual Amade.

"The instrumental to this track felt very lively and energetic," they say. "There are a lot of little elements hidden in the music, almost as if they’re constantly trying to talk through each other. I took that concept and pictured a couple sitting at a dinner table. ‘Listen’ ended up being a song about favouring child-like stubbornness over maturity. The inability to filter thoughts, and instead, trying to talk your way out.

"It’s basically me saying to myself ‘things would be a lot easier if you just listened’."