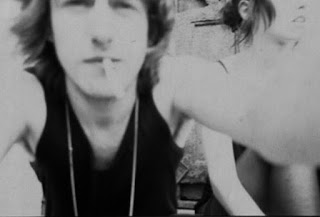 It's a big-hitting, punchy number, interspersed with some great guitar hooks, and which is also available as a free download from the band's website.

"'Getaway' was the first track I wrote with the idea of Mara Falls, it's a song about taking a plunge, chasing what you love, and doing in a completely relentless way," reveals vocalist Peter Black, who started Mara Falls initially as a solo project. "We recorded, produced and mixed it ourselves. Same with all the artwork, we really believe in the DIY thing. There is no excuse to really go for it then, we're not waiting on no one."

Taking their band name from Alejandro Jodorowsky's film El Topo ("It's an old biblical name of a bitter lake and to do with death and rebirth. In Buddhism is a demon that tempts you with seductive visions of beautiful women. It seems to be this name that has all these links and I was always drawn to it"), after meeting bassist Lola in London and later joining up with drummer Peter Szots, "it all fell into place with the way we all get on... so we all moved to Coventry to get the live set together."

And you can check out just what the Mara Falls live show is all about when they play their debut gig at Coventry's Kasbah tomorrow (February 17).