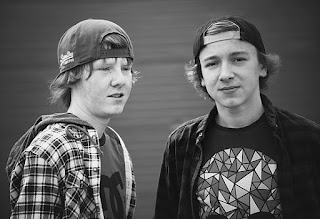 Guitarist Cameron McLean powers the track with a frantic Royal Blood inspired rampage leaving a ferociously incensed Connor McCarthy (vocals/ drums) to belt out a dramatic Biffy Clyro infused chorus of: “The rich are rich, the poor don’t get paid / the kids are starving while the rich get laid.” Such is the venom and overwhelming feeling of unjust in this track, it wouldn’t surprise me if at the completion of this song he proceeded to throw a TV with Sky News on it out of his Bathgate window.

Little Indie featured Pyro back on January 10 with their debut single ‘Money’, and this latest song feels like another positive step in the right direction for this young pair, both just 17 years old. Since then, they’ve gained more traction as a result of being selected by DJ Jim Gellatly to appear at Stereofunk festival in April alongside Scottish festival favourites Indigo Velvet, Mickey 9’s and Vladimir.

Knocking on the door of politics is a popular route for bands just now as we’ve seen recently with the successes of Vant and The Blinders who have favoured this approach. It paves the way for more open and honest song writing and it’s satisfying to see a young band have their say on these important topics and going against the grain of perhaps what is expected of young bands to be writing about.