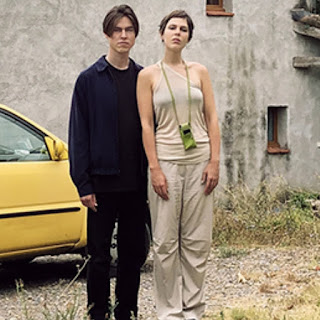 Nanne Hil (vocals, synths, production) and Dave Sorry (synths, production) who comprise Dutch duo Ohslo, record their sultry soft songs in their bedroom, sitting on the floor amidst synthesizers. You can feel they possibly work best late at night too, such is the chilled out vibe they exude.

Their first full-length 'Honeymoon' is set to drop on January 29 through Babyrace Records, and ahead of that they offer one of its tracks, 'Wires', as a teaser, together with equally ambient visuals, which Little Indie premieres here.

"'Wires' originated from a dream I had, in which the world was slowly taken over by an intelligent artificial network," explains Nanne. "This network had a weird physical quality to it. Strangely, I was the only human there. First I resisted the superhuman character of the network, but slowly this changed into a sense of awe and trust. In the AI I had a feeling of deep understanding and unity. So I gave in and became one with the network."

On the video, which was filmed by Raydrick Feliciana and edited by Nanne herself, she adds:

"In the video, in a bedroom covered with green screens we tried to find a juxtaposition between the natural and artificial in my movements and the imagery."