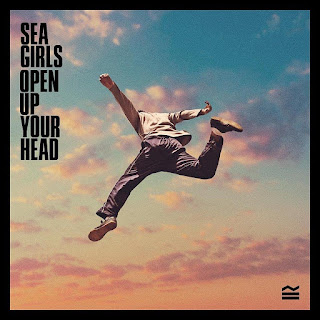 Open Up Your Head

It feels as if Sea Girls have taken their time in bringing out a first album. Three years after their debut EP, 'Call Me Out', the title track makes a comeback here on this Larry Hibbitt-produced full-length 'Open Up Your Head'.

Featuring 14 guitar-pop tracks, it includes some of their best from their previous EPs, alongside newer works. Of the previously heard material we have the infectious 'All I Want To Hear You Say', one of the high points here, and of which vocalist Henry Camamile has said he was "vocally just pushing the envelope," and that when he wrote the song "I was trying to channel some emotional highs and lows of the likes of Kurt Cobain. Full of visual adrenalin, it builds with rushes of excitement and lack of control." He seems to have hit the mark, and who, on hearing this live, has not sung along to the key question “how you doing?”

The optimism of 'Violet' is vibrant and contagious, with singalong lyrics partnered by spirited drums, shimmering synths and bouncy guitars working in tandem, is met in contrast by the bittersweet 'Forever'. A yearning four minutes (with a spine-tingling opening) that declares, "I'm never gonna live forever / why would I even try?" is a song that is big, yet intimate with expressive vocal delivery, and some quite masterly guitar work, that make it stand out amongst its bedfellows.

After telling the unseen listener that "You're not the inspiration /You're not the reason for this song / If you want an explanation / The damage is, damage is done," the chiming guitars of 'Damage Done' back the resigned intention to "drop a bomb on the past / Yeah well, nothing ever lasts / And there's no going back Who needs memories?" in a more sombre toned number.

The album's oldest song is the band's pummeling 2017 debut single 'Call Me Out', all loud jangly guitars overseen by the now familiar baritone vocal, and a catchy earworm chorus; while new to the Sea Girls discography, 'Transplant', displays Camamile's voice in the opening minute to its best, as it is complemented by jangly synths. The other new offering 'Weight In Gold' is  a more downtempo number in the pack as it starts off,  with Camamile asserting to"Kill the past, forget the future," before it swells on a country-style hoe-down.

Filled with adept songwriting that cleverly weaves its way unobtrusively in and out of bubbly indie-pop anthems, 'Open Up Your Head' is also not afraid to show its more vulnerable side, or its capacity to be both honest and captivating.