Track Of The Day :: Dribble - Taking Off 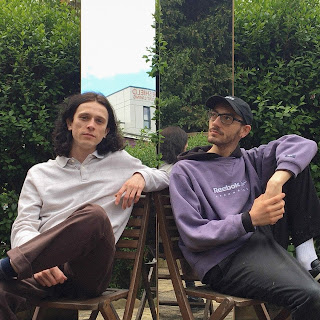 That the newly formed Dribble should call their debut release 'Taking Off' might be deemed somewhat ironic. Already they seem to have fallen foul of the Twitter police with their account currently suspended for violating rules (the reprobates!), and there is littie to be had on any of their other socials. So maybe not quite taking off as stalling a bit.

The pair behind the Dribble project which set up just a few few months ago, will be familiar to some as two-thirds of the West Midlands band Afterbloom, Luke Morgan and Thomas Hadley, with Morgan also previously the bassist with Heavy Waves. Where they are based now, could be either Newcastle as given on their silent Bandcamp, or London as stated on an email sent out. They obviously get around!

But everything aside, 'Taking Off' - out now via Pantherburn Records - is a decent start. Written at the beginning of lockdown, it was "born out of the paranoia of Covid and the desire to get away from it all," they say. "We thought it would be ironic to write a song about taking off somewhere in a global lockdown.”

Meeting halfway between Morgan's penchant for punk/doom and Tom's grunge/garage-rock, the result is a hybrid encapsulating the elements in a dark and heavy two-minute burn that is without restraint as its guitars thunder and the vocals smoulder in a foreboding intonation.

“We wanted to capture that big, fat doom sound, but condense things into a more accessible structure," the two add. "Essentially heavy, dirty, gritty hooks that rip through into your head and set up shop. Lyrically speaking, we wanted to talk about current events and modern life in general.”

Which just about sums it all up.