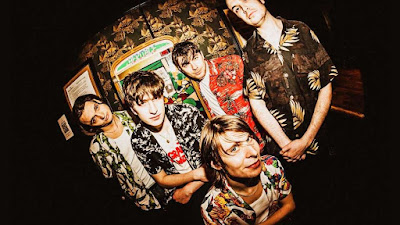 The Cabbage punks are back!

Check out the thrust of the scuzzy 'Get Outta My Brain' at the bottom - which once you've heard it, you may well be saying to yourself!

The homage to Shaun Ryder, Black Grape and an electric affirmation of life, good and bad, in city of Manchester, the single has dropped with a music visual.

To top it, the five-piece are also releasing 'Amarantha Pantherina', their long-awaited follow-up album to 2018's debut 'Nihilistic Glamour Shots’,
on September 25.

Co-frontman, Lee Broadbent, says of the Shaun Ryder-inspired 'Get Outta My Brain': “The title of the track has two meanings and it’s about the balance of how the two meanings constantly fight each other - some people just want to run away and some people intoxicate themselves to run away. It’s an attempt to channel the spirit of Manchester and is purposely amped to become a choice cut when we get out to do it live.”