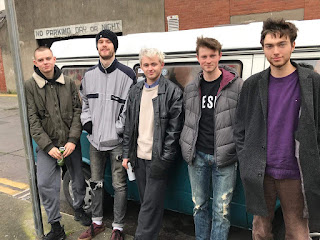 Turnstiles recently dropped 'Same Old Stories', the latest track from the Galway five-piece, which was recorded back in January at Windmill Lane Studios in Dublin with Cian Synnott.

Coming after the earlier release of -'I.D.C' - which Little Indie spoke to guitarist Cillian Ryan on in May - 'Same Old Stories' employs the same sense of urgency, driven by a belting rhythm section and dual angular guitar attack from Ryan and Colm Sweeney.

The incisive two and a half minute, full-on punk attack is fuelled by an amalgam of built-up frustration and disillusionment about missed opportunities and embracing life, and via Callum Mitchell's frank and emphatic vocals, urging to "cherish every minute every second while you're young, cos no-one seems to notice when they're standing in the sun."