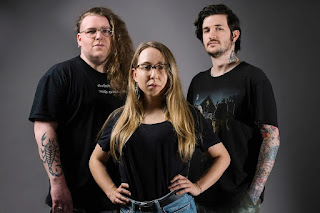 Taken from their March released self-titled album, Stroud's punk rockers Milk Teeth have a video for the track 'Sharks' to offer.

"The video for 'Sharks' was put together to show fans and friends having fun during lockdown," says vocalist Becky Bloomfield. "It’s been a really weird few months globally and incredibly isolating for many, the aim of the video was to bring the music community together while we aren’t able be together in person. The submissions brought a lot of joy - a huge thank you to those who took part. 'Sharks' is lyrically a very dark song juxtaposed against a catchy melody and tempo.

"Originally written on the piano, it’s about when I was being bullied for almost two years after a bad breakup and having to stay strong and determined even though I was getting swarmed by 'sharks'. The “I need you like the air that I breathe” symbolises the unhealthy connection I had to the person involved - they were being abusive but I’d still feel like I needed them and their approval no matter how badly I was treated.

"The last verse is about how resilience is so important and that they may have left me vulnerable and metaphorically 'exposed' but that I wouldn’t be made to disappear until my bones have rusted out (resilience) and that even the wear and tear wouldn’t beat me."

Grab a watch below.