Valley Boy light up on 'Cigarette' 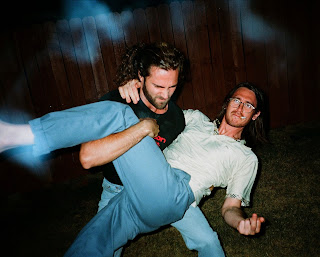 The track wraps you in a haze of punchy guitars, gritty bassline, warped synths and passionate vocals that showcase relatable lyrics, wrapped around gospel-like harmonies in the chorus.

‘Cigarette’ is James’s ode to a childhood spent being the reluctant and scared friend (“think Chuckie from Rugrats”) in his friendship group of more daring and adventurous boys.

“My home life was pretty sad," he shares, "(my dad and mom spent most of my teen years apart or in flux and my older brother was kicked out of the house for being a drug dealer and I didn’t have much contact with him), but after Ian and I met in middle school P.E. he quickly became my extended family and we were basically together every day."

Ian adds: "The word 'cigarette' in the song is actually more of a symbol for dangerous behaviour than it is a literal reference to smoking the sticks that killed my favourite Aunt. James was always silently or not so silently judging me and our friend group for doing daring and stupid things like jumping into trashcans and drinking his dead grandpa’s liquor. I always encouraged James to join me in what I thought was perfectly age-appropriate behaviour, telling him such iconic phrases as, 'come on dude' or, 'shut up' or, 'we’re all gonna die someday'---wink wink. The most adventurous thing James would do as a kid was go on a hike."

Check out 'Cigarette’ below via the video, directed and edited by Zach Johnston and animated by Ben Smith.