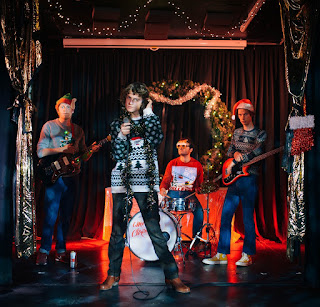 It arrives alongside news of two special socially-distanced shows by the Cardiff band as part of Independent Venue Week, at London's Lafayette on January 28 2021, and The Brudenell Social Club, Leeds the night after.

"Weirdly enough, this Christmas song was written many years ago, but I suppose the absolute grinding nightmare we call consumer capitalism never really takes a sick day even during a global pandemic," says frontman Tom Rees of the cracking alt-Crimbo number, which is out now through Communion.

"At least one positive take away from writing sarcastic songs about capitalism is that the situation is almost definitely only going to get worse and we can only become more alarmingly relevant as each year goes by.

"All of this considered, I did just buy a gigantic new computer screen from Currys/PC World (another great conglomerate, on a side note, I have never actually bought anything physically in PC World, because they never have it there, I think they need to change their name, they can’t advertise themselves as a WORLD OF PC’S without actually having what you want, but I digress) so I’m not quite immune to the charm of it all, I just like to nag more than anything.”


Check it out here -