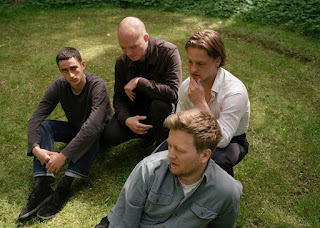 Danish indie-rock four-piece Yung have shared a new single 'Such a Man', the second track lifted from their second album 'Ongoing Dispute', due for release on January 22 2021 via PNKSLM Recordings.

While effortless songwriting seems to be a staple tale of rock history, Yung confess that the frenetic sonic pace of 'Such A Man' is "Our only example of this, in terms of writing songs for ‘Ongoing Dispute’."

Following the recent 'Above Water', they say the new single was "A songwriting potluck of sorts, written in roughly an hour whilst Mikkel [Holm Silkjæ] frantically roamed the corridors outside our rehearsal space working out the lyrics."

Mikkel says of the track: “A recent personal experience had sparked a train of reflection on manhood, fuelling the writing process and making its way into the song. Growing up, masculinity was portrayed to me as something very one-sided. The experience referenced in the lyrics helped me realise a pattern in coping with loss and pain in the archetypical man. I think from a subconscious point of view I needed to address that in order to fully reevaluate my childhood image of manliness.”