Deadletter open 2021 with new track ‘Fall of the Big Screen’ 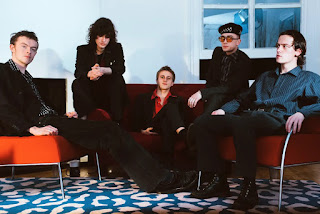 South London-via-Yorkshire's Deadletter channel the droll fury of The Fall and the lopsided rhythm of Gang of Four into a strain of vehement post-punk, exploring the darker side of existence through a lens of narrative-driven levity on urgent new single ‘Fall of the Big Screen’.

Lamenting the loss of cinemas and independent creative spaces, frontman Zac Lawrence says of the atmosphetic and darkly textured track:

“As streaming services became household names, there was little doubt in anyone’s minds that they were the future. Thousands of films, documentaries, and series alike, right there at the click of a button. No more will the cinema be regarded as the entertainment giant it once was. Just like its’ musical cousin, the independent venues that hold big screens and popcorn machines are slowly but surely evaporating.

"Who needs to make the choice and effort of how and when to be entertained, when Mr Bezos and Mr Hastings have presented you with all you can ask for from the comfort of your own living room? We have swapped theatrical experience for ease of access.

"We are being sold free choice at the click of a button when in reality our options are shrinking as monopolistic corporations haunt every item of consumption, as we are algorithmically given a narrow margin of preference which blinds us to any true alternative. The Fall of the Big Screen is imminent, and this is our cry of understanding.”