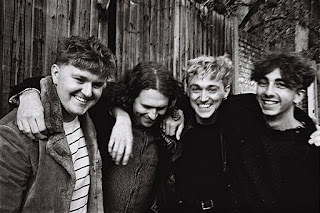 London’s DROOL return with new single ‘Lizard’, out on February 12. Produced by the band and mixed by Tom Dalgety (Pixies, Royal Blood), the single is a dark ballad inspired by Lee Hazlewood’s ‘Summer Wine’.

Howdy, I’m Joey Rogers, vocalist and guitarist in DROOL. Then we also have Martin Söderin on drums, Louis Greenway, lead guitar, and Charlie Pinnock on bass.

I’m from Walsall and when I moved to London I ended up writing quite a few tunes and wanted an outlet for them. After showing them to a few mates, one of them introduced me to Martin - who's Swedish - in a cafe in Dalston. He had just left VANT and I showed him a few tunes - including 'Fun' and 'Junkyard' which are currently out - and we formed DROOL there and then. He thought he was joining a fully formed band but it was just me and I didn’t know any musicians in London so he had to find them, ha!

We have a holy trinity of Beatles, Sabbath and Pixies. Within that are obviously many other influences - The Strokes, Love, Blur etc. I guess overall it’s a 90s alternative sound we call 'outsider pop'.

I usually write x amount of ideas a week and send them to the boys; they say whether they like them or not, and we work on them from there. I’ll never send anything too unfinished as I think it’s hard to fall in love with a song if it lacks a true sound or direction.

'Lizard' is a song that took a while to finish. The verse is one of the first things I ever wrote when I was about 16 after hearing Lee Hazlewood's 'Summer Wine'. I really liked the lyrics and the general feel of it; five years later I was recording something else with a mate and I was playing that and the rest just came. I think we were listening to Lana Del Ray at the time as inspiration  - not sure that comes through? It was recorded up in Newcastle at our friend Alex Blamire's studio.

For 2021 we want to give people more songs to listen to. It's a singles world out there now, but we’d like to release minimum two EPs and record an album.
Where can we hear more of your music?