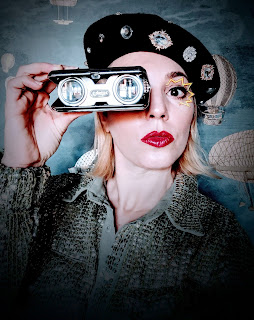 Glasgow’s Tamara Schlesinger boasts an impressive CV with musical credits in Skins and feature films 127 Hours and Scream 4. Reincarnating for a solo career as MALKA - and with Lauren Laverne, Jessie Ware and BBC 6 music’s Chris Hawkins among supporters - she’s back with the Eastern sounding electro-pop track ‘Reach Out.’

The song which carries similar vibes to Ladyhawke and shades of Marika Hackman details MALKA’s struggles throughout 2020 as she suffered from a gruelling eight months of Long Covid. Perhaps starting its journey as something of a frustrated account of the emotional and physical exhaustion the symptoms delivered, ‘Reach Out’ bursts into life with an underlying message of hope which lights up the track and leaves you feeling re-energised.

There’s been plenty of attempts at Covid-inspired tunes which have floated about in some capacity over the last nine or ten months alongside a raft of quick buck films popping up on streaming services. Many of these have missed the landing and could be filed in the “too soon” category with the nightmare still stalking our rear-view mirror. This feels different though, there’s a real sense of honesty, hope and a determination to make the best of a terrible situation which is a reminder we could all do with every so often when the storm clouds gather and the all too familiar sounds of BBC News reverberate through our living rooms.

Tamara is also the pioneer behind HenHoose, a new songwriting collective aiming to provide more opportunities for female & non-binary artists in the music industry.