Pizza Crunch's new single is no 'Coma-Inducing Gibberish' (so there!) 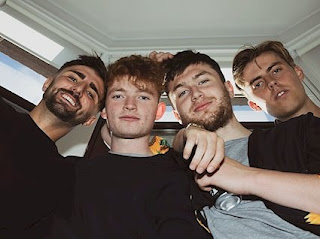 Following on from November’s ‘Off Their Heads’, Glasgow’s Pizza Crunch serve up ‘Coma-Inducing Gibberish.’ Out today (February 5) it’s the quartet’s fourth outing and second single to be released by Liverpool’s Disobedient Records.

The track has a similar pulse to The Strokes when they were at their peak and before they rather ironically began releasing coma-inducing gibberish themselves. The clockwork guitars from Ewan Hearns and Nathan Stokoe chime along throughout and perfectly complement each other whilst delivering some timely Vitamin D to an otherwise routine grey and uninspiring February day.

You could perhaps join the track together with a piece of string to The Vaccines ‘Post Break-up Sex’ too with the vocals and tempo travelling down a similar melancholic highway with one or two glimmers of sunlight peeking through the clouds. Far from identical twins, but some recognisable features that bring back decade old memories.

"The song essentially builds to a chorus that outlines the pain of speaking to someone who won’t stop talking,” the band explain. “The verses follow life setbacks and lead to the conversation with this person in the chorus being all the more infuriating and 'coma-inducing'.”

Having taken little pause for breath since the release of the aforementioned three-track debut EP ‘Off Their Heads’, Pizza Crunch are certainly putting a shift in and going from strength to strength with every release.