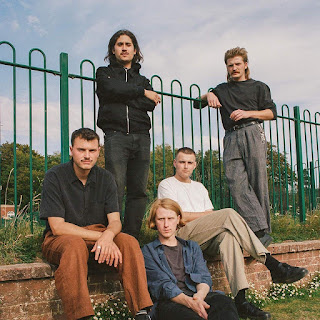 We first heard the then newly formed Social Contract (led by ex-Birmingham band Laced's guitarist Josh Eggerton) back in 2017 when they emerged with their debut 'Citizen'.

The London-bases quintet have now released their first new track of 2021, the title cut of their upcoming second EP, 'Buzzards Wake', which is out on March 12 on Pantherburn Records.

The six-minute atmospheric bluesgaze number was produced by Neil Kennedy at The Ranch Production House, Southampton in July last year, and was one of the first songs Social Contract wrote a few years back and has been in constant flux ever since. Opting not to demo or record it, they instead decided to let it grow and morph organically by existing in the live space only.

Their patience paid off, for this structure-free environment has spawned a bold, dynamic and inventive song. It wasn’t until new members Arun Starkey (bass) and  Frank Cartwright (synth, piano) helped write the doomy build up section, with frontman Eggerton's use of a violin bow over his electric guitar, that it felt ready to take to the studio. The track features some of Eggerton’s most personal lyrics to date, touching on how he used the timeless nature in his native Shropshire to process and cope with loss and change.

"'Buzzards Wake' touches on how nature has been an anchor for me while trying to mourn or digest a loss," says Eggerton. "When life is changing quickly or moving fast, I find it hard to process or settle my thoughts in the city. But there’s a mere by my house, and whenever I’d walk through its surrounding fields and woods, the timelessness of it all really helped me put that internal chaos to bed.

"There’s something so peaceful and comforting about how my walks there always feel the same, hence my lyrics 'It won’t ever change / the kettle hole, the glacial mere / it won’t ever change / a cast of wings, the fallow deer.' Its like a small oasis of stillness in an ever-shifting world.

"I guess kind of ironically then, this track is one that we've let change and shift however it pleases over the years, avoiding cementing it in any way. We wanted to see it grow so we made a point not to demo or record it and only played it in the practice room or on stage. It ended up taking on a sort of life of its own and this is the first time we've captured it in a recording."