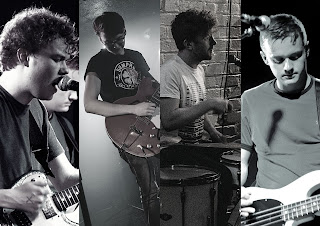 Following in the footsteps of The Snuts, West Lothian four-piece Static Satellites release their fourth offering ‘The Symphony’ today (February 5).

The deeply atmospheric new single has shades of one-time Little Indie favourites, but now sadly defunct, Acrylic, about it with its dreamy guitar lines gliding through the song.

The track and forthcoming EP, ‘As The Dark Unfolds' - scheduled for a May release - was recorded and produced by Edinburgh producer Mark Morrow in his studio where he’s also notably recorded local acts Swim School, Indigo Velvet and Vistas.

Vocally, the delivery and pronunciation from frontman Ross Whelan bears a striking resemblance to fellow countrymen The Twilight Sad which adds to the mood and ambience of the song.

Whilst it’s a new release, the band say it’s been hovering about in the atmosphere for a little while, “The Symphony has been a part of our set and the make-up of this band from the very beginning. It was one of the very first songs we played together in the studio.” The quartet proclaim that this is their favourite song to play live which gives us something to look forward to when venue doors swing open again.