19&YOU share 'PART OF YOU' (feat. Carlie Hanson) off forthcoming debut EP 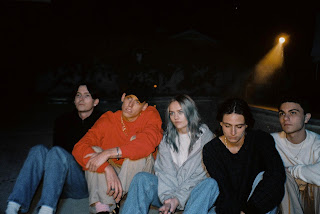 After sharing 'HEAD/HEART' earlier in the year, 19&YOU are back with 'PART OF YOU' (feat. Carlie Hanson).

Coming ahead of the LA-based Australian band's self-titled debut EP out on April 23, the track serves as a sweeping tribute to love and the fond memories of a former life.

'PART OF YOU' showcases lead singer Cameron Graves’ sugar sweet vocals and the band’s penchant for crisp arrangements and soft pop textures. The song is further elevated by the angelic and impactful vocals of Carlie Hanson.

“‘PART OF YOU’ is about being in love with someone you are close with, but who isn’t reciprocating those feelings," they say. "Our second verse, ‘I’ll be stuck second place to somebody you meet, and I’ll be replaced while no one fills the space you leave,’ speaks to the pain of watching the one you love fall in love with another, and the fear that you’ll never get over that person.

"We love the references we make in this song, from the mention of Bondi Beach where we used to spend time in Australia, to the memorable nights spent in Chinatown. It was important that we tell this story using our own experiences, even though it’s a situation anyone can relate to."

Check out the track via the John Esparza directed music video.