Galway's Slyrydes release the forceful ‘Boy In The Debs Suit’ 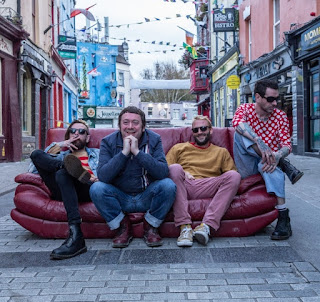 Produced and engineered by Dan Doherty at Darklands in Dublin, 'Boy in the Debs Suit' is the sixth single from Galway's Slyrydes.

Released earlier this month, it is one of the tracks set to appear on the four-piece's debut album, 'What Happens When You Get Happy?', due later this year.

The rawness of 'Boy In The Debs Suit’ is shrouded in dark post-punk-like instrumentation, while the thrust of drums and guitars carries a heavier punk-rock edge. Marc Raftery's direct and intense vocal delivery helms the three-minutes-plus with a precise and controlled tension, as they punctuate the lyrics surrounding the missing 'boy in the debs suit': "Been missing since Wednesday / he's tall / Six feet two / 'Last seen around Galway / hair was brown, eyes were blue' / I am in shock cause I saw him last week."

Check out the track via the video, below.