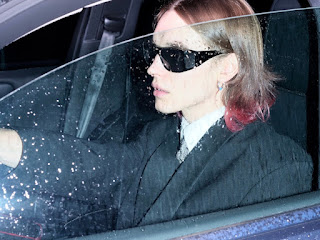 Stockholm-based Sindy is the project of Swedish musician Tom Serner, and after last year's self-produced debut EP 'Hits for Kids', he is about to release first album, 'HORROR HEAD'.

Co-produced with Jacob Haage (El Perro Del Mar, HOLY etc) and out on April 23 via PNKSLM Recordings on vinyl and digitally, the album is a technicolor realisation of Serner’s vision; filtering his influences through a dreampop lens, revisioning a decade’s worth of indie rock in the mould of Cocteau Twins, while taking influence from the likes of My Bloody Valentine, Sonic Youth, Sebadoh and Daniel Johnston.

At the centre are Serner’s breathy vocals - think an off-kilter Elliott Smith - delivering what Serner himself describes as “seriously deranged four-chord songs”.

On album cut 'EDGE-GIRL', he says:

"A lot of the songs are just, you know attempts to put kind of abstract really big things into the few-word format of a song. I’ve been collecting images and text continuously, so I think I subconsciously wrote for characters. I've tried a sort of ready-made approach, some of the lyrics are just a mash-up of morbid one-liners from Buffy the Vampire slayer. 'EDGE-GIRL' is loosely based on Faith, Buffy's bad girl Slayer frenemy."