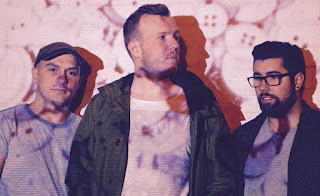 Leicestershire alt-electronic three-piece French Leave began two years ago in September. Following the release of their debut EP 'In Our Youth' earlier this year, they have gone on to support the likes of Ekkah, Coasts, All Tvvins and Lisbon.

Now about to release their first single 'Head Over Heels' digitally on September 18, the band, who say they aim to create music that centres around a feeling of space, certainly manage that with their penchant for reverb and delay, mixed with modern electronic sounds. 'Head Over Heels', while drawing on familiar influences, also strikes its own distinctive edge with Chris Reid's vocal deliverance adding a dramatic tone.

With further releases planned in the coming months, "We're looking forward to what the future holds, and can't wait for people to hear the new material," say the band, who have been working with producer Dave Tidmarsh.