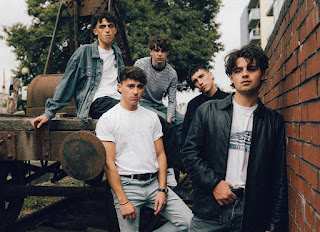 Rising Plymouth band The Native shared their latest rousing single 'Frontline' recently, and now they top it off with a video.
Directed by actor Cosmo Jarvis (Peaky Blinders, Raised By Wolves), it was shot on an old abandoned airstrip in the depths of Cornwall. A desolate place that ties into the song’s narrative, with all the live footage shot on location in an old RAF building.
"Cosmo is a southwest legend, he has such great energy and put everything into the shoot which really shows in the final cut,” say the five-piece, who are seen getting on their bikes in the vid.
“Riding around the runway on those bikes brought us back to when we were little kids. We had such a laugh, it was one of the best days we’ve had in a while and hopefully that comes across in the video”.
Watch the video below.