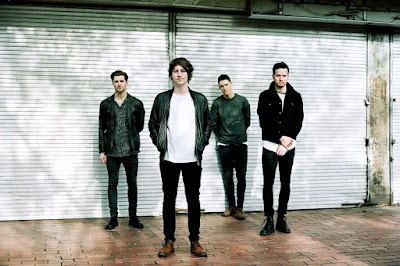 Fresh from their tour with Eliza and the Bear, London indie pop four-piece Slowlights are far from taking things slowly as they ready new material for their forthcoming self-titled EP.

Today, Little Indie premieres 'A Light', the first of the record's four tracks which will be followed by a further track being unveiled each month until the EP is released in its entirety on June 1.

It is a track that may be familiar to fans from the band's live set, but not one initially intended for the EP.

"We started playing it live and it always got a great reaction," vocalist/guitarist Dan Clark tells us. "Then we played it to our producer and he wanted to give it a go. It was the easiest track on the EP to record as we just set up in the live room and played it exactly how we usually do at shows."

The producer in question is Peter Miles, who has worked with the likes of We Are The Ocean. Andreas Moe, Tellison, and Dry The River. It was after Slowlights heard the latter's 'Alarms In The Heart' that they approached Miles, and subsequently spent time in the studio with him in January.

'A Light' is one of those vibrant, festival-friendly sing-along tunes that builds up over the course of four minutes and has a feelgood energy raising vibe to it delivered via Clark's soaring vocal and uplifting guitar and percussion.